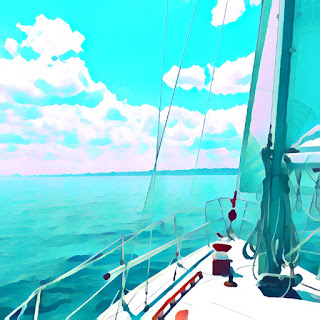 July began with a sailing staycation on Yondering. Really, the first extended change of scene since months of lockdown at home. Such a sense of ease, of freedom, and open space!
On a windless morning we motored over to Toronto Island and dropped anchor at the water filtration plant for our first over nite. There were a lot of boats on the wall, but not as many as we expected to find. Spaces were opening up here and there every couple of hours, so those with patience could eventually land a spot.
The next morning, a dinghy ride along hidden shoreline to visit the island's resident blue heron, and then a walk on Centre Island's familiar paths. The Pier and gardens felt quite deserted. Although a few people had ventured over on the ferry, not many were afoot and the lifeguard was left alone to ponder the horizon from his high lookout. 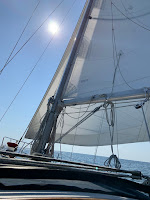 A quick motor over to Ward island beach. Calm water and low wind meant we were able to stay overnight - a special treat. I managed my first swim of the season off the boat. Then, a beautiful return sail to Bluffers Park as the winds picked up. 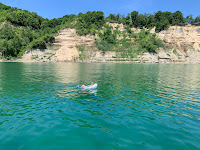 Saturday and Sunday nights we anchored closer to home, right by the Bluffs. Between 4-8 pm on both days there was almost intolerable jet ski and powerboat traffic, tearing up the shore with noise and wake. Thankfully the stinkpots eventually relented. Swinging on a hook with Caroline on Ruby Tuesday and Aldo and Alex on Alcione. 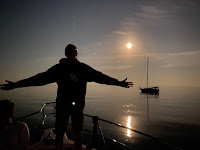 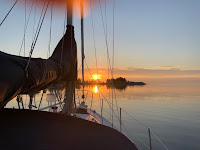 Moonrise was idyllic, the lake so calm. Sunrise a gift to start the day.
What joy!
We didn't find out until May 20 that there would be a launch on June 20. Shakedown sail on June 27 and get away July 1 - July 6.
Rob has made some improvements that help make Yondering more comfortable. New cockpit cushions make for enjoyable lounging and travelling. Getting rid of the heater in the cabin creates more space because we can hoist up the table and get better access to shelves port side.
Posted by Diane at 12:57 PM

Oh my lucky duck! Boating would be such a treat right now..looks lovely!

"With freedom, books, flowers, and the moon, who could not be happy? Oscar Wilde, De Profundis

"I am so amazed at times that I am actually alive." Andy Goldsworthy
"I urge you to please notice when you are happy, and exclaim or murmur or think at some point, 'If this isn't nice, I don't know what is.'" Kurt Vonnegut

The Only Café
by Linden MacIntyre
Toronto streets and familiar neighbourhoods are the setting for much of the telling, with forays to the East Coast and references to war torn Lebanon. It's a complicated simple story. Complicated because of contemporary events traced b...
tagged: canlit and toronto

Do Not Say We Have Nothing
by Madeleine Thien
I feel the book has expanded my world view by educating me about China's struggles over the course of the last century, and made history more understandable by telling such a layered story through So many different lives. Full of poetry,...
tagged: canlit

The World in Six Songs: How the Musical Brain Created Human Nature
by Daniel J. Levitin
Interesting way of categorizing music and conjecture of how music and humanity evolved together. Conversations and interviews with Sting, George Martin, and other music luminaries are peppered throughout, but usually add additional conte...
tagged: non-fiction

Seven Stones to Stand or Fall
by Diana Gabaldon
Very much enjoyed sampling the stories in this collection and appreciated the introduction and overview on how the pieces fit into the prolific series. addictive to so many! It wasn't necessary to have read all the novels in order to app...
tagged: book-club-picks and historical

The Subtle Art of Not Giving a F*ck: A Counterintuitive Approach to Living a Good Life
by Mark Manson
So many books about giving a f*ck, not giving a f*ck, whether or not to give a f*ck. This is one of the better ones, good anecdotes along the way. Provocative & easy read.

"Many of us pursue pleasure with such breathless haste that we hurry past it." Soren Kierkegaard

Sow a thought, reap an action;
Sow an action, reap a habit;
Sow a habit, reap a character;
Sow a character, and you reap a destiny.
Charles Reade

"Now and then it is good to pause in our pursuit of happiness and just be happy." Guilliame Apollinaire